Cart before the horse? Or an error in memory?

Of course, none of us are old enough to have bought our Model T new. But reading the work of Murray Fahnestock, contributor to the Ford Owner, and the Ford section in Dykes, as well as “The Model T FordOwner” (sections republished by Dan Post).

Fahnestock lived in Pittsburgh, Pa. in 1914. Pittsburgh at that time had a Ford Branch Factory.

In Fahnestock’s text he stated that his first encounter with the Model T was in 1914, after years of such cars as Peugeot, Pittsburgh Six, Mobile steamer, and a Reading-Standard, Harley-Davidson, and Thor. He stated that he bought a Model T new.

Looks more like a typographical error but which source is wrong?

Did he take delivery on August 1, 1914 or just purchase the car on that date?

I could be a typo or he could have purchased the car and taken delivery at a later date if the dealer didn’t have the model he wanted in stock.

You make a very good point and one of several possibilities.

The motor assembly dates for 1913 and 1914 in Bruce’s Book suggest motor number 554,792 was assembled on August 11th so it couldn’t possibly be assembled into a car until after that date. If the completed motor was shipped to PA, got to be another week, so we are probably looking at no sooner than the last ten days of August to be in a car.

Also, the 1915 motor assembly dates are backed up by records only 4 months later. Add to that the daily unit production numbers are known for 1913 and 1914 and Bruce apparently assigned dates based on those numbers.

What we do know today is we can confirm some of the dates of motor assembly in 1913 and 1914 that appear in Bruce’s Book. They appear to be correct and this is why:

It is easy to see that if the dates were “off” 3-4 weeks “earlier” to meet Murray’s recollection, the above example could not happen. The transmission date is hand stamped on the stub shaft so we have only six days before motor assembly. Close, but probably correct.

I would speculate that Murray’s memory was off a little or you are correct 46woodduck. 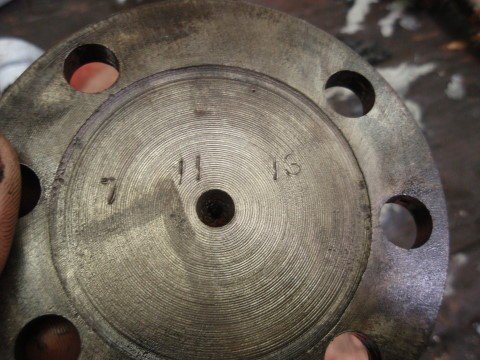