Jay posted this over on the other site. 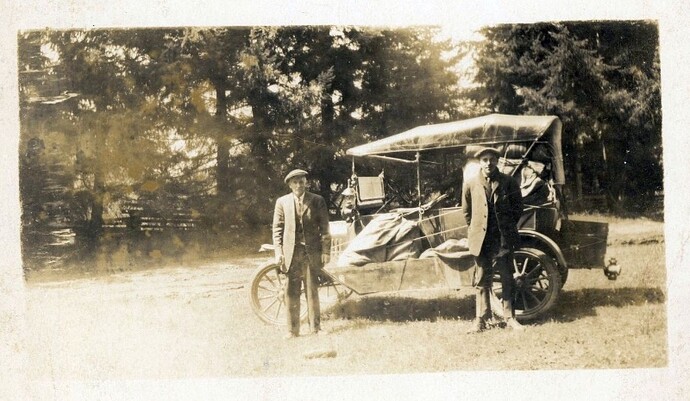 818858.jpg800×465 157 KB
I find this utterly fascinating, having traveled between these two points
using “the old road” as much as possible. The “old road” as it is exists for
me to know it, is NOT the “old road” these gents were experiencing, as most
of them were “improved” and paved before I was born. In 1920, routes were
from point-to-point, small town-to-small town and followed the geography,
rather than through routes like we have today. How I would love to have a
detailed journal of this trip, … the route, the mishaps and problems, the
adventure. What a window into another time that would be ! 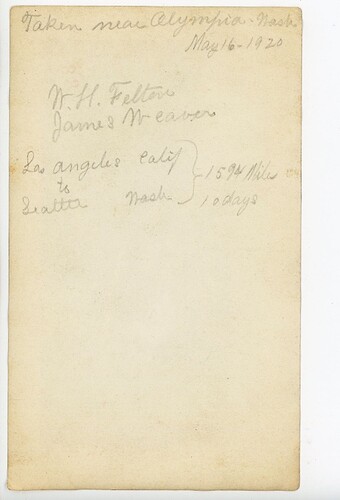 There’s no kids being taught cursive writing any more, so there won’t be anyone capable of reading it either in a few years. I look at the load of stuff on that '16 touring and think it must have been quite an adventure.

The more I think about this, the more amazing the adventure must
have been. Early May, anywhere north of Redding, California is mighty
wet. North of the Siskiyous it would have been an utter mud bog on
unpaved roads. Historical documents abound regarding the “terrible
need” around the northwest for what were then called “better roads”
by the burgeoning auto-driving class, who found the deep mud impassable.
In 1920, the Better Roads movement was barely getting started and most
roads were still rutted wagon roads. To think these guys made 15954
miles in ten days … that is AMAZING !

Obviously, they found a sunny day around Olympia to have this photo
taken. Doubly surprising, as Olympia is a VERY wet place … wetter than
Seattle.

I like to peruse old maps and am always on the lookout for “the old road”.
Google maps is wonderful for seeing satellite images of the forgotten trails
that got bypassed as automobiles got faster and the public pushed for more
direct routes. Back then train travel was how you got around the countryside
anywhere outside your own county. Prettyneat stuff to consider as you motor
about in a 100-year-old vehicle.