Hey there Royce (or whomever else knows the answer and can point me in the right direction).
After over three years I haven’t been able to do much work on my model Ts, I am finally beginning to work on the '15 runabout again. My first real effort now, is the fenders. While my car may not be an intact original, it is a real original spring of 1915 runabout body that had been separated from its original chassis (somewhere, is someone with a nice '15 on an original chassis and a later body that was in nicer condition when it was restored back in the '60s). I had an assembled mostly era correct '15 chassis, so when a good friend offered me the body? I figured it was a perfect match. While I can’t afford to make the car perfect, and much of it (both body and chassis) are in marginal condition and not best choice for a top quality restoration, I am trying to make it nice enough, and as correct as I can for a spring of 1915 runabout. The original body manufacturer’s serial number metal tag was still on the body when I got it, and has a date code for February of 1915. I figure another month or two for finishing and assembly of the full car, so spring should cover the time frame just fine.
My question. Which version of the '15/'16 curved flat rear fenders would be correct for spring '15? And for general information sake, can you tell me about when each different style was used. I have several fenders to work with, both fronts and rears. I am aware of three variations for the rear fenders. While all three appear generally the same? The rivet pattern for the mounting bracket at the top middle of the fender is different. One style is three rivets, in a triangle pattern, similar to the common late '15/'16 front fender brackets. The outer rivets are near the bead on the fender. Another style has four rivets in a Inca style pyramid (broad base, flat top) pattern. The outer rivets for these are on the fender bead.
The third style has only two rivets, the two outer ones on the bead of the fender. My belief is that the two rivet variety is a 1916 fender. However, I do not know this for certain. I suspect the three rivet is the '15 style, and would guess that the four rivet was somewhere between the two. But I do not know this, and I may be completely wrong.
And, were there any other variations of these rear fenders?

Thank you for any history, help, advice you can give.
I do like your website here. A lot of excellent information. I do like checking in here from time to time.
Again, thank you.

Three rivets on the quite wide 1915 only fender is what was used originally. Photo property of the Benson Ford archive used under my license. 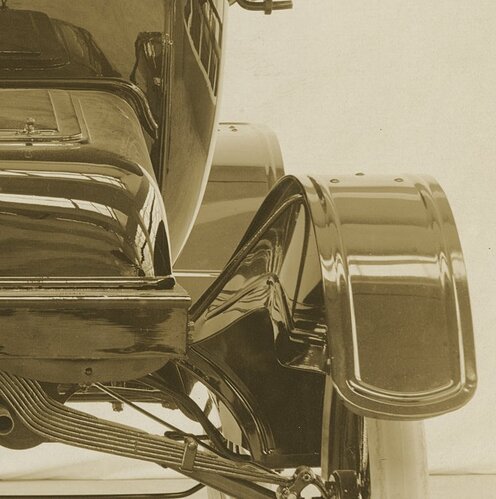 I spent a lot of time recently looking at the front fender brackets and record of change for the fender and bracket drawings at the Benson Ford archive. I think you are spot on with the approximate change in the first weeks of June 1915 from four rivers to three.