After my 1915 engine gave up by spitting some babbit in the pan, I purchased a “used” engine that had been rebuilt by the late Herman Campbell to get me by until I can get a complete rebuild done on the '15. It is a 1917 engine number and I was told it had about 200 miles on it before the previous owner replaced it with another engine that had a starter. I was told the 4th main would need re-babbit. I got it home and started looking a little closer at the ball cap/4th main and realized that the drive shaft is not in good shape. See picture. I guess I am going to have to replace it as well as the 4th main. Parts are available from vendors, but it looks like a big job to do, removing hogshead, engine pan, turning a bushing in the drive plate to it’s connecting shaft, etc. Any advice?
Thanks in advance, 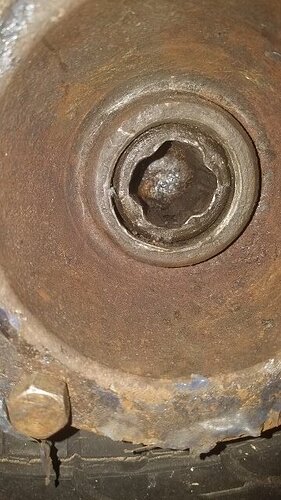 It looks like the U joint was never greased. You will have to remove the engine to replace the output shaft. Then get a new babbited 4th main ball cap. Should take a weekend but not that bad of a job. What does the U joint look like?

This is not the engine that is in the car. I have not pulled the engine out of the car, yet, so I am not sure what the U-joint will look like.

This appears to be an engine that was abused for years before it finally quit working. I would take the hogshead off and then the pan to see if anything inside is usable.

This is not the engine that is in the car. I have not pulled the engine out of the car, yet, so I am not sure what the U-joint will look like.

I have torn the engine down now, and this will be a complete overhaul. Besides needing to replace the drive plate (pictured), the transmission bushing are shot. Not an engine with only 200 miles on it.

The frame mount bracket on the left side of the oil pan appears bent inward, which made pulling the hogshead difficult. Babbit is worn beyond spec and no shims left to remove. Anyone recommend a place to have the rebuild done? Also, does someone straighted oil pans? Looking for all recommendations.