Following an article linked to by cudaman for readying my 24 Fordor for starting
DG93 I came across something puzzling.
.
Putting a new negative ground strap sounds simple enough and certainly within my abilities, however something with my T has been changed over time and I don’t understand exactly why. and if the change is important or if I can just put things back according to the published wiring diagram.
The positive ground strap isn’t a strap, but a cable(OK, not a big deal, but here is the reason why) which is grounded somewhere in the trans/engine area (I’m still looking for the attachment point)
Obviously I can’t find a ground strap that long unless I go the custom route if that’s even an option, and that wouldn’t be anything close to being original. Also, putting a power cut off switch—also recommended—would likely be very awkward to access.

So here’s my question:
Is there any reason to ground the battery somewhere other than where Henry Ford wanted it grounded?
Also, there is a hole in the frame where I assume the battery was originally grounded. If I return it to the original, is there a “proper” bolt/nut combination for grounding to the frame?

Here are a couple of pics of the battery grounding arrangement on my 1924 cut-off touring (converted to a pickup with a tilt bed). Seems to work fine for me. Be sure to scrape the grease and paint off of the chassis where the ground strap is bolted to ensure a good electrical connection. 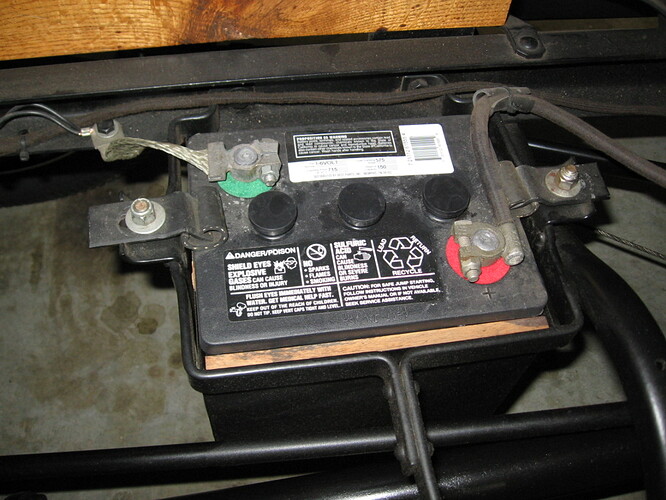 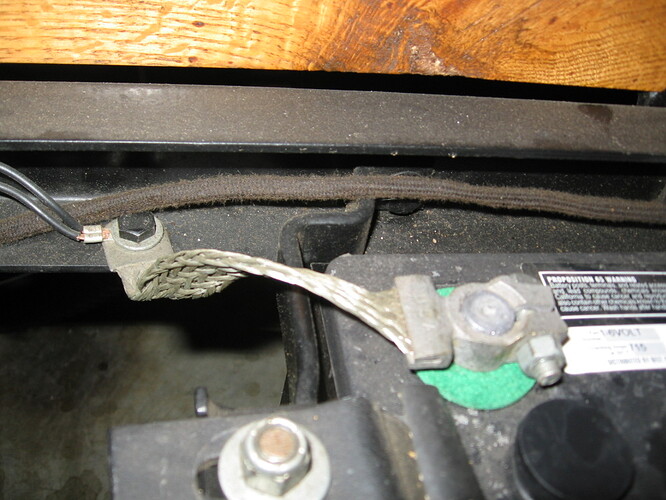 Regarding a power cutoff switch, some folks install a fuse on the upstream side of the starter button, it will protect all of the wiring on the car except the fat wire from the switch to the starter. 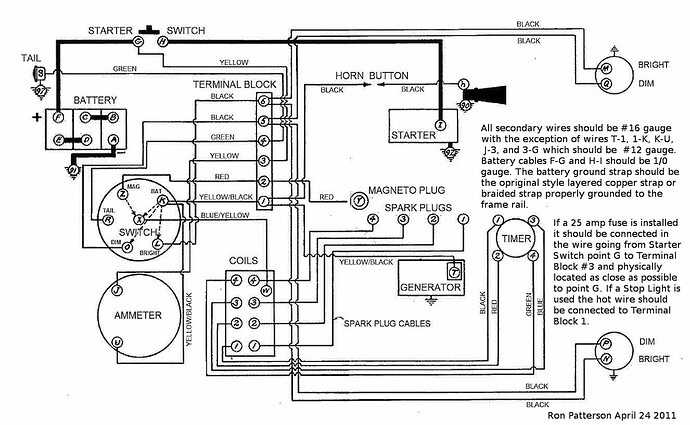 Thanks! What do the smaller gauge wires coming off the strap connection connect to (or ground?)

They are for the aftermarket turn signals that the previous owner added.

Got it!
It doesn’t take much to confuse me these days.

Since the Fordor T is still hemmed in the garage, I swept up the mouse poop and spiders under it the best I could and climbed awkwardly on a creeper, and creeped while tracing the battery cables.
No luck in finding the ends beyond the gas tank under the front seat, so I decided to lift off the floorboards and trace from the topside, which required ripping out the fossilized indoor/outdoor carpeting. That took a surprising amount of time due to the condition of the carpeting.
By now the morning was far spent. I made a mental note that the floorboards were badly worn and could use some help if not replacement.
I’ll need to mull that issue over some, but first I needed to find where the positive terminal is grounded.
At last I found the cable, followed it a short way and found that it was grounded on one of the bolts attaching the transmission door!
Why?
So I figure there is no reason not to order a flat woven cable and attach it to the frame like Henry Ford originally wanted.
But how long a woven cable? I found three lengths listed in the Model T supplier’s websites.
Eyeballing it, it looks as if the 6" length should fit. I’ll measure the distance to the hole in the frame to be sure of it.

Then there is the battery spacer. I made two, one is 2" thick , the other is about 1" and the idea if I understand it, is to raise the battery up so I can use the original battery hold down clamps.
So there will be that to play with as well.

I usually make two 2X4 pieces of wood the length of the battery and nail them to a 1" piece of board the size of the battery. That way the battery is elevated 1" and the two other pieces straddle the strap that supports the battery.

Thanks!
I split a 2x6 into two 1x6s, notched midway on the long side to fit the strap that supports the battery and screwed them to two 1x1s that run along each side of the strap, It seems to hold the battery in place securely.

Since I have the floor boards out I might as well give them a coat of paint,
I have a rattle can of black gloss enamel, Is that what Henry used on floor boards?

Ford used some kind of black wood preservative. If it was me, I would use satin black, not glossy.

Since the interior is original I’ll need to find a product that’s compatible so it will adhere to the original finish that’s left.
OR sand it all down to bare wood then paint.
OR replace the floor boards with reproductions
Of course it’ll all eventually be carpeted over anyway.
Ai-yi-yi! My brain is beginning to hurt.

Your local hardware store probably sells a quart of black paint and a 2" brush to apply it with.

Ugh! It’s too cold to paint today.
While I’m waiting for it to warm up, let’s discuss paint.
A preservative paint makes me think of varnish or shellac.
Minwax makes a black varnish, or should I try adding black pigment to clear shellac?
Or just stick with enamel, oil based or alkyd?
Or does it even matter since it’s going to eventually be carpeted over?

Probably the cheapest Rustoleum enamel in a quart can will last longer than you will.The black minwax polyurethane spar varnish would be best but it is expensive.

Good points!
I suppose the biggest question now, since the current finish is (I think) original, is will enamel bond to whatever is already on there?
Time to experiment—when it gets warm enough for paint to dry.

Ford used only what was cheapest and quickest. Quality was not job #1.