There are a number of Jay’s great speedster photos we have additional information that may be of interest to some folks.

These Model T speedster/racers were actually created and sponsored by the Ford Motor Company during 1910 through 1912 and driven by Ford Company employees such as the well known Frank Kulick. Ford raced both “Stock” and “NonStock” Model T cars during this time.

The first photograph was a publicity photograph taken in May 1911 at the Michigan State Fair Grounds, prior to the 1911 Algonquin Hill Climb meet 8 June 1911, and used to promote the races at Hawthorne Track in Chicago on June 10 and 11, 1911. It is a 389.9 cubic inch NonStock Ford Special racer that Frank Kulick probably raced at Algonquin June 8, 1911, numbered as the 42 car. Note the set back 4-cylinder NonStock Ford Special engine through the dash.

It was only 3-1/2 miles from the Ford Motor Company plant on Woodward to the Fair Grounds.

Third photograph is from the Chicago Tribune of Frank Kulick driving the 42 car, one of two 389.9 cubic inch NonStock Ford Special racers at Algonquin June 8, 1911. The set back engine not apparent in this photo but the two “boss” areas for the Bosch Magneto and drive both visible on the lower front part of the hood. Also, the exhaust port for #1 cylinder visible above and between the two bossed sections.

Frank Kulick drove another one of these 389.9 cubic inch NonStock Ford Special racers at the same Algonquin Hill Climb as the number 64 car. 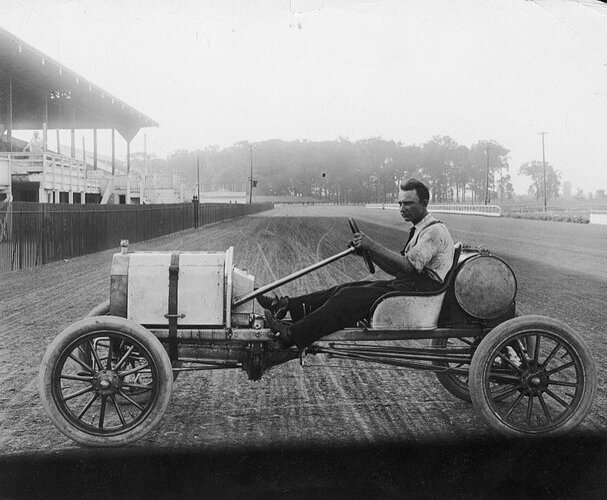 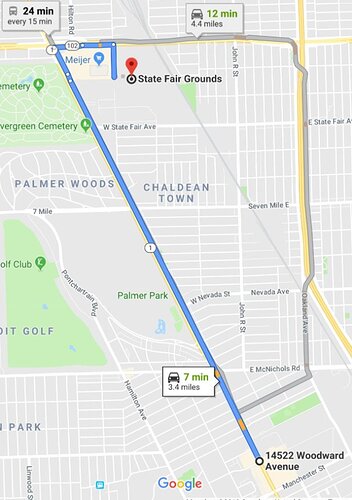 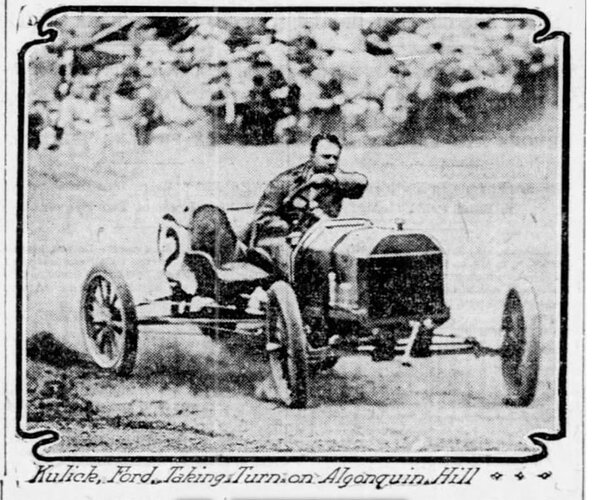 Frank Kulick in the Ford 6 Car at the Michigan State Fair Grounds race track on Tuesday, 26 September 1911, for the Five Mile first race.
The 6 Car is a Nonstock Ford Special 228.3 cubic inch small block racer. It is sitting next to the Case “White Streak” racer, Joe Jagersberger driver.

In the photo, they are setting up the starting line for the first race of the rain shortened program. They will be joined by Lou Heineman driving the Case “Giant” required to make it a three-car race. Frank Kulick wins this Five Mile race in 4 minutes 52-2/5 seconds. Kulick’s average speed is 61.56 mph for the win.

The same three cars run a Ten Mile race later in the day. Joe Jagersberger wins that race in the Case “White Streak”and Kulick places second. Time on the Ten-Mile race is 9 minutes 47-2/5 seconds. Jagersberger’s average speed is 61.29 mph for the win.

Second Photo:
Closeup of Frank Kulick in the 6 Car. Behind Kulick’s steering wheel is Joe Jagersberger in his Case “White Streak”.

Third Photo:
Later in the afternoon, Frank Kulick will drive one of two 410 cubic inch large block Nonstock Ford Special V nosed racers he brings to this meet in a one-mile sprint from a standing start. Kulick establishes the Michigan State Fair Grounds Track one-mile record of 50 seconds.
Publicity photo taken next to the Ford plant. 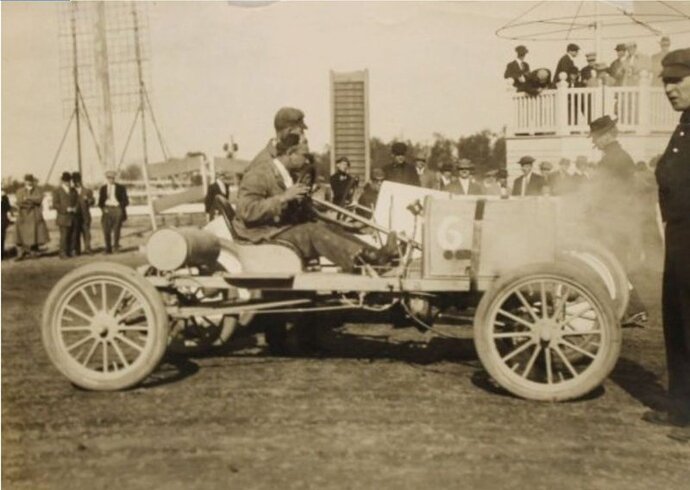 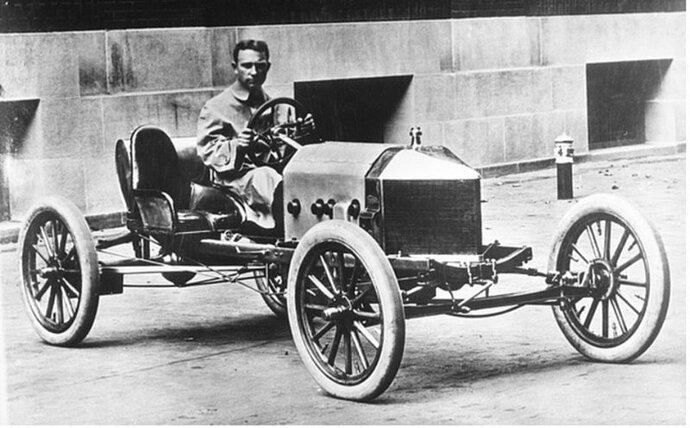 Most of these photos can be found in the collections of The Henry Ford museum. The copyrights have long expired. The museum will provide a high resolution image for a reasonable cost if desired.

Some of above are also available from the Detroit Public Library collections.

I sent you a PM but I’m unable to see that it went.

It is a stock Model T Ford chassis and required to have a 176.7 cubic inch engine. All AAA race cars must be registered with AAA in New York 30 days prior to any event in which they participate and are subject to verification by race officials prior to and after events.

The photograph was taken during a practice run in the five days before the race on 26 August 1910. This 38-car and Frank Kulick’s 31-car were both disqualified prior to the race for not meeting the minimum weight of 1,400 pounds and didn’t race. Henry Ford was at the races and refused to add weight to the cars. When challenged, the “lightweight” attribute of the Ford Model T would continue to hamper Ford’s “return to racing” in the AAA sanctioned racing circuit (U.S.) from this race through 1912.

Frank Kulick had raced in two AAA sanctioned events earlier in August 1910 without being challenged on meeting the minimum weight limits. 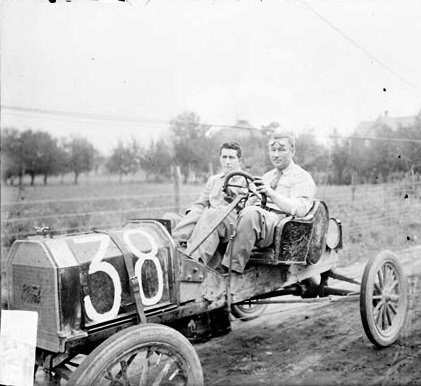 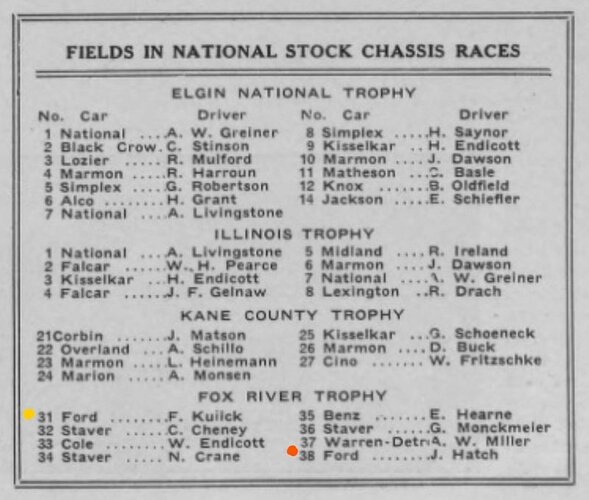 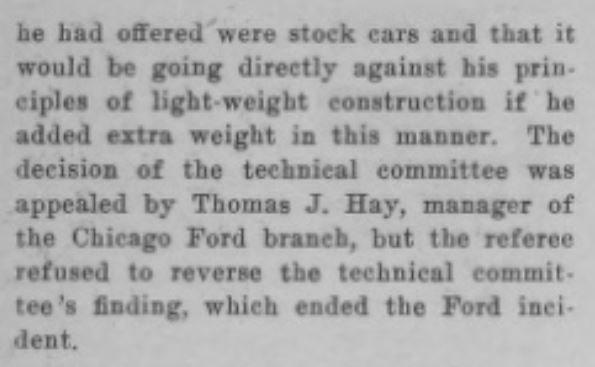 In the Ford Times for February 1911, by permission, Ford announced they were sending Frank Kulick to the Mardi Gras Races in New Orleans to drive one of the two racers. Ford also stated in the Detroit news they were sending two of the same 161-230 cubic inch racers that would qualify as AAA Stock Chassis Racers. Although reported in the local New Orleans newspapers, the second 161-230 cubic inch racer was not entered in New Orleans and had no driver except “partner of Kulick”. 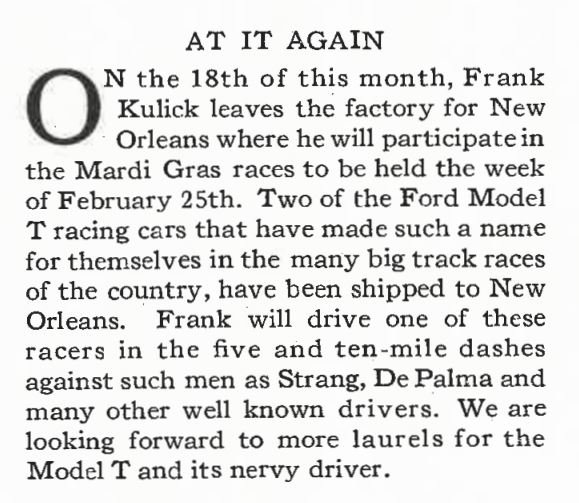 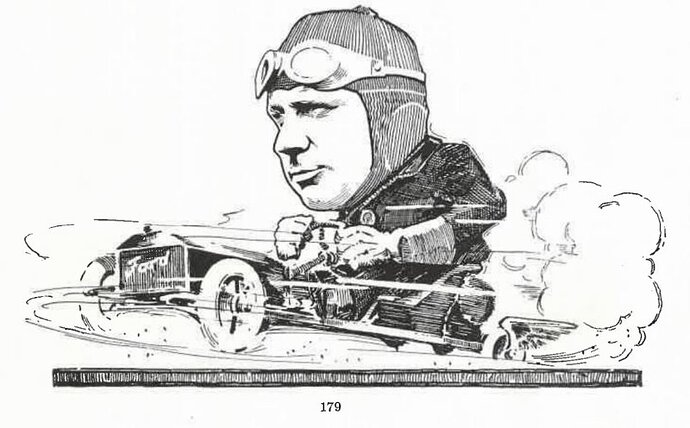 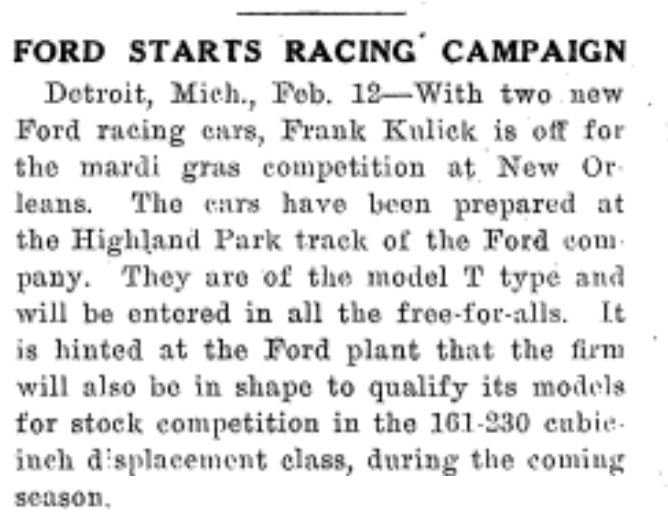 Could have been six wins….

“The most thrilling race of the first day (Saturday, February 25th) was the 10-mile free-for-all when, because of its winning the first two races for 161-230 and 231-300 class cars, the Ford was given only few yards handicap over the huge 100 h.p. Buick which started scratch. Ford Times Page 192”.

That would have made a fourth win for the first day but since Kulick drove the same 12-car in both previous two class light car races (1st and 3rd events), he had to average the times in handicapping the Ford 12-car and lost by a whisker to the Buick (8th event)!

Ford Motor Company sent two 176.7 cubic inch racers to the AAA sanctioned event and Frank Kulick chose the below photographed 12 car Model T to race. Kulick is shown in the Ford Times March 1911 article, by permission, ready to race in the first 161 to 230 cubic inch event. AAA requires that the Ford is a 176.7 cubic inch displacement as that is the only production model that Ford manufactures and sells on the automobile market. These two racers were stock stripped chassis racers as described in the AAA Rules: 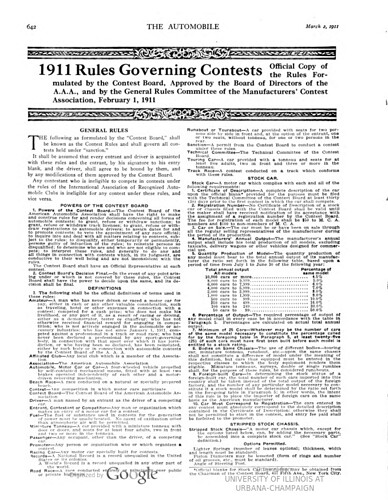 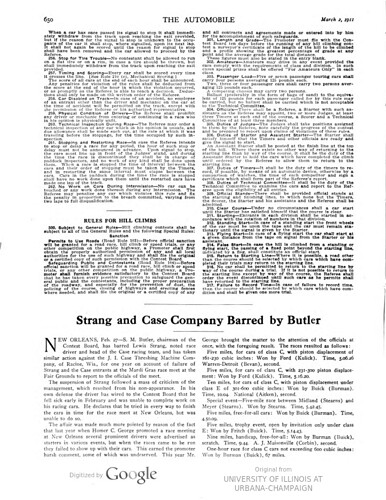 The Ford Model T 12-car racer appears to be powered by a Ford special engine. AAA allowed this as long as the displacement was equal, or less, than the standard production line engine and would classify the racer as a “Stock stripped chassis racer”. The Ford had to be 176.7 cubic inch displacement in order to compete in the New Orleans Meet. Probably running a Bosch magneto which is also permitted. No coil box is visible. 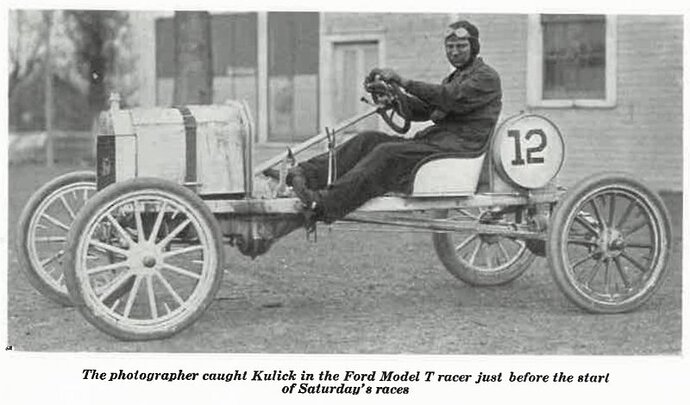 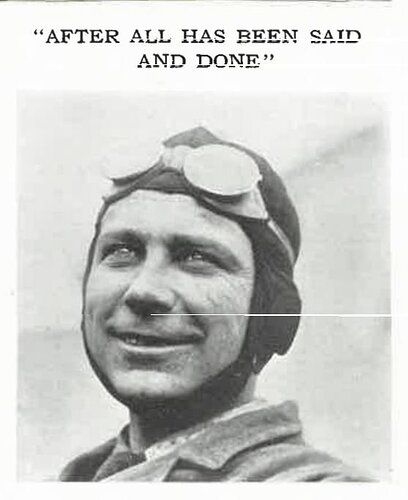 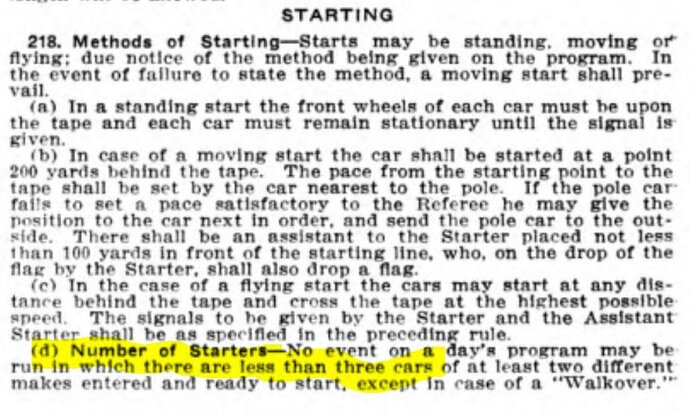 That is very interesting. Notice all the rim locks on both the front and rear wheels - they have the appearance of additional valve stems.