This picture is from almost exactly 8 years ago. Me and Dad went for a drive in my 1912 touring in November 2009. Stopped at Keller’s for some coffee. Good times.

Great photo, Royce. Wish I could have met your dad as you always talked about him.

Here’s my dad and grand-dad with grand-dad’s '26 T coupe which my dad purchased new in Huntington Beach for $620. This photo was taken in 1954. 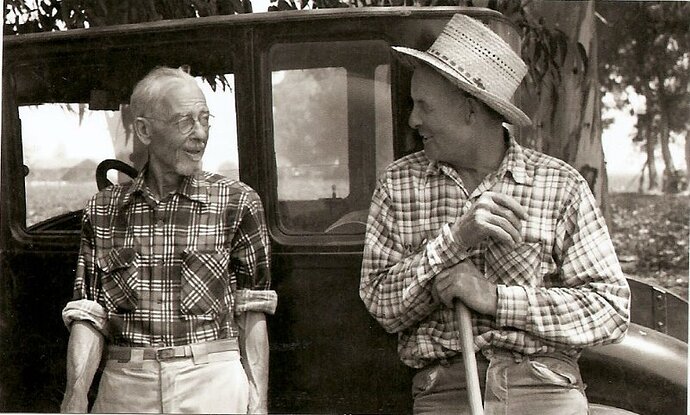 I walked past my nextdoor neighbor’s place yesterday and saw “Dad” sitting
on the couch with his 6-7 year-old son. Looked like they might have been
playing a game or one reading to the other. I think people call this “quality
time”. Whatever it was, it was something that never happened in my house,
growing up. Dad was someone to be avoided. The best you could hope for
was that he would not notice you.

I have photos of Dad with his Model T’s and A’s. He even had a 31 Auburn
speedster ! But by the time he had kids, all that was gone and he was just
angry.

I envy you guys who had good parental relationships. The loss when they
pass hurts, but it is because you had something to lose. I only wish I had
memories of hanging with Dad, doing cool stuff. Thanks for the post. Good
stuff.

Thanks for the photos. Your Mom and Dad were very special people. I am glad that i knew them.

Really great point, Steve. I have always been attracted to old people
and things since times of my earliest memories. I can vividly recall going
out into my Grandfather’s large garage and just soaking up the ambiance.
I could not have been more than 2-4. We moved away when I was almost
5. I would just go out there and take in the slanted rays of sunlight coming
through the dirty, multi-paned windows, bouncing off the chrome and glass
his collection of Buicks inside. His work bench was a wonder of old tools
and half-finished projects. One wall was floor-to-ceiling shelves of nails
and screws, all housed in ancient fruit jars with the glass and zinc lids. How
I wish I had had the presence of mind to press him with questions and help
with his projects on the bench.

The whole TT sickness came to me when my friends and I discovered Mrs.
Miller’s farm over on the far side of the hill from ours. In her implement
was a TT nearly identical to the one I drive today, and a Fordson tractor
with wheels with ENORMOUS lugs, along with various disc, plow, and other
attachments for it. In her basement was a prohibition-era still, just waiting
for someone to light the fire again. Mrs. Miller was a fountain of information
about the old days around our area, and could wax on forever about the old
ferry boat across Lake Washington and the trolleys that all disappeared in
the depression. Being 10 and 14, I just did not have the historical grasp to
ask so many questions that have come to me since. Mrs. Miller was nearly
100 in 1975.

Mr. Moore lived closer and was forcefully “retired” from the woods at the
age of 70. He was born in Minnesota in 1883 and spent his life as a whistle
punk, donkey operator, and ultimately a steam locomotive engineer, hauling
logs to the mill. He shared a story with a group of us kids once that still
blows my mind. It was 1905 and he saw his first automobile. It was at night,
along a rural road. He said the noise and lights were like nothing he had ever
known and it scared the hell out of him. He likened it to (people used to use
this phrase a lot), Martians invading. He said he backed away into the darkness
of a meadow and every hair on his body stood on end. Said he had never been
so terrified in his life.
Later, while telling others in town about this encounter, he was informed of
who and what the “invasion” had been about and everyone had a good laugh.
Mr. Moore taught us kids lots of “dirty” rhymes and such that he knew from
working as a logger. He made in to a healthy 105 years old. Good bones in
that gene pool. Wish I could ask him a whole lot of questions today !

Photo taken on the way into a car show.