I have a large collection of steam era photos. Some show Model T’s.
Many do not. All show the America that Model T’s plied every day.

My interest in Model T’s is more about that time in American history
than the specific vehicle itself. The T’s were an iconic part of that
period, for sure, but the roads, the buildings, the bridges, and all the
zillions of little details that were of that time are where my head lives.

I hope you enjoy.

This one says it was taken in 1915. I love the openwire telephone
line and the organic way the dirt street, buildings, and yards all meld
together with none of the modern breaks and “code directed” sidewalks,
setbacks, green strips, etc. 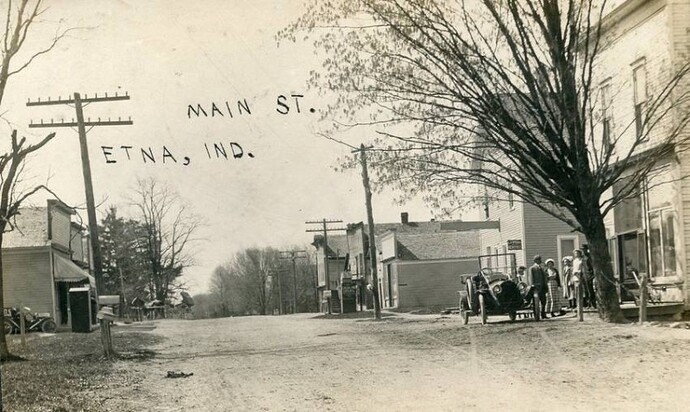 Dolgeville, NY, 1925. The builder’s “crest” on the bridge is just too cool.
I could spend all day just walking around this scene. 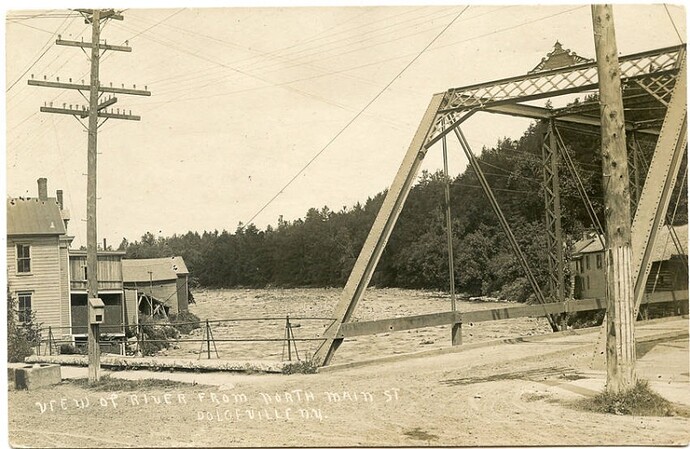 Another one from Dolgeville, NY. This time it is 1907. A horsedrawn
wagon is coming our way in the distance. Love the boardwalks ! The
lacy lattice-design railings on each side of the street suggest a stream
passes underneath. 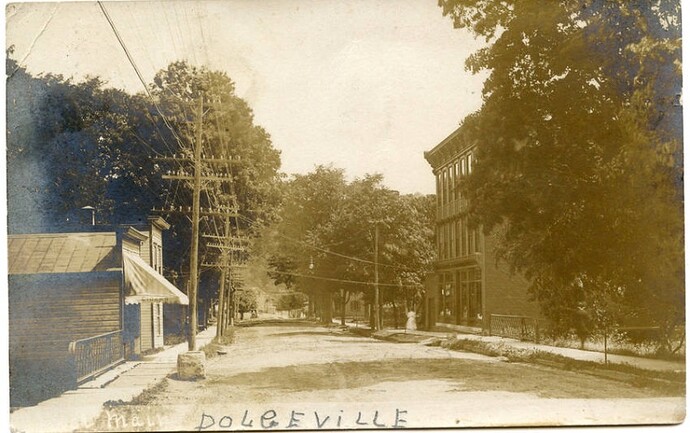 Bethel, Vermont, 1910, the caption says. Man, is this scene inviting !
Where did we lose our way in knowing what was cool ? 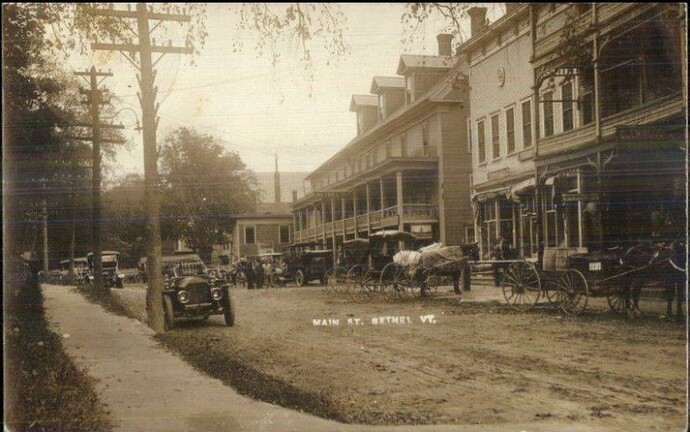 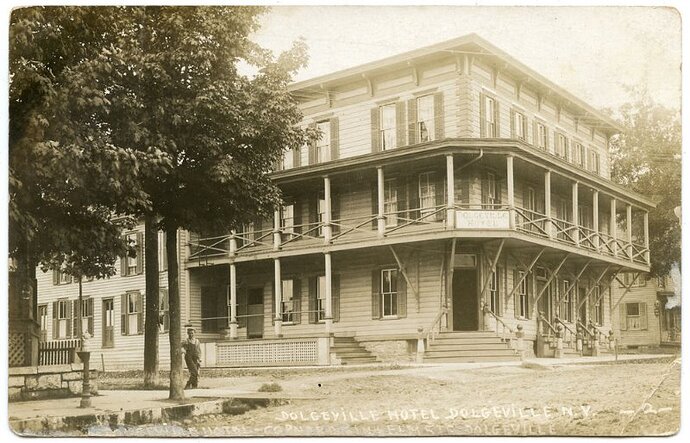 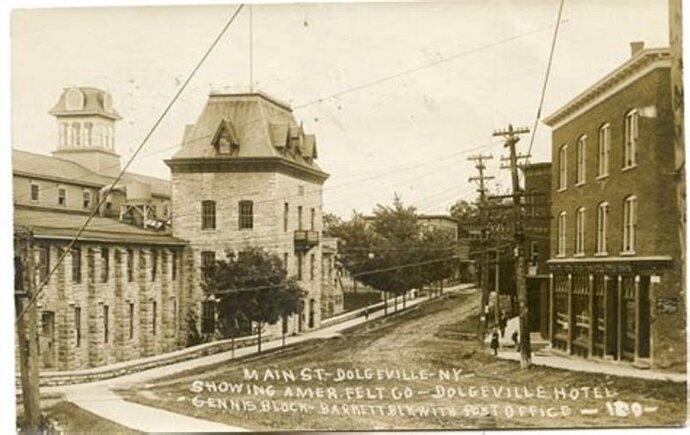 Here’s a Ford-specific photo. The Universal Motor Co. in Eatonville,
Washington. Cars in the showroom look to be 1915 to this untrained
brass-era eye. The reflection in the glass shows the way business and
residential buildings comfortably intermingled in pre-war America.
Living across the street from a Ford dealership today would be an
exercise in noise, traffic, and obnoxious lights. 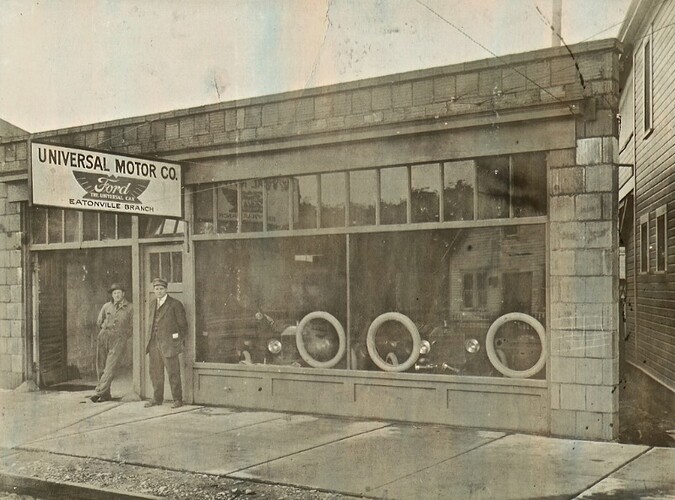 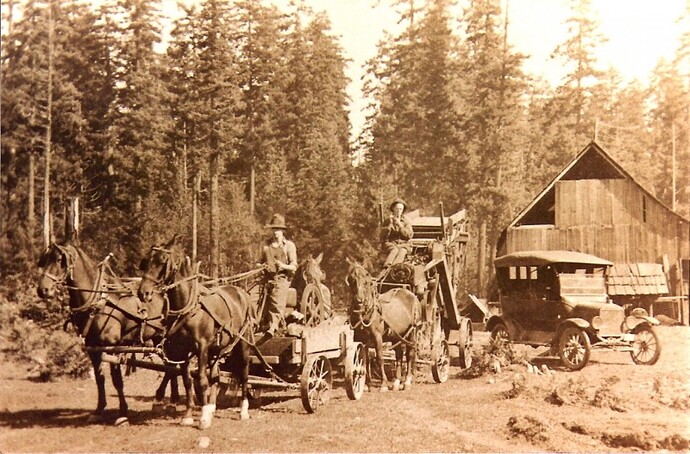 Ah, the ubiquitous trolley ! And a heavy truck from the Model T
era. Chances are this truck lacked heated seats. How did people
survive ? 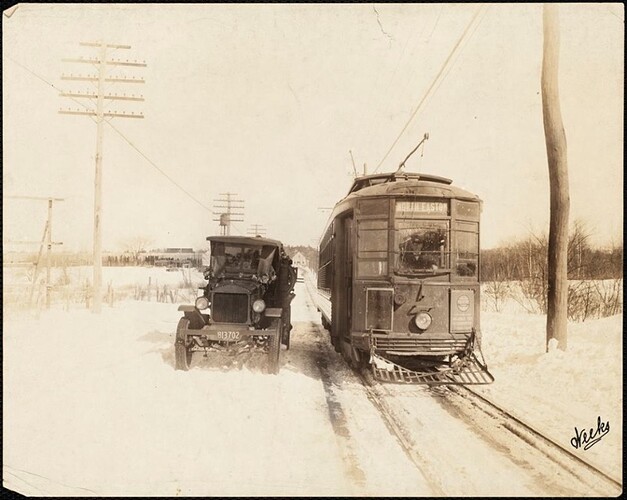 No Model T’s in this shot, but a lot of Americana going on,
just the same. The gas station and country store, the wood
footbridge, the wig-wag crossing signal, the railroad tracks,
the unpaved roads, the telegraph line, the telephone line,
the local power, and the very old-school high voltage line.

Photo credit goes to Shorpy. Caption says “Lamoille, Iowa,
October 1939”. Another scene I would just love to walk around
in for a whole day. 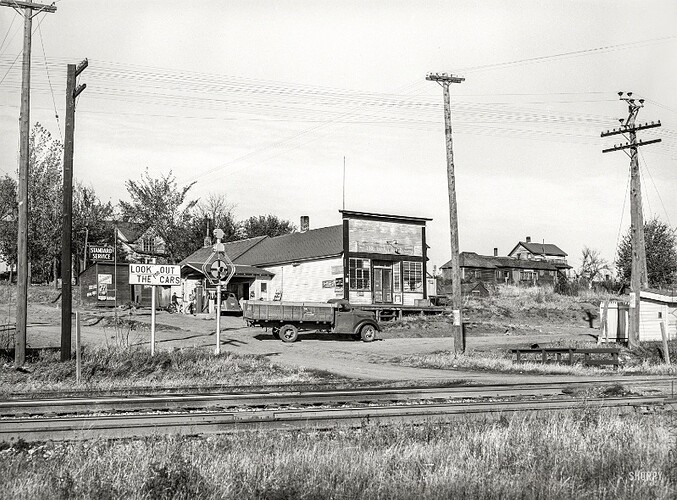 Been slacking for a while. This to post a few more pix !

Great small town street scene I’d like to walk in to. Grab an ice cream at the place
on the left and walk next door to see what they stock at the Auto Livery, maybe step
out into the street and admire F.W. Black’s archtectural stylings. That old curbside gas
pump is interesting … Is that a Buick in the doorway ? 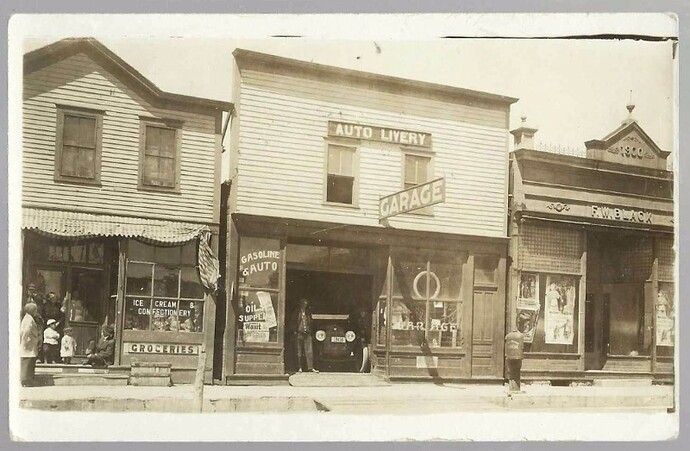 Here’s a wonderful road I’d like to take my old truck down, just to see
where it goes. That powerline with the “flappityback” type insulators is
interesting. Pretty early for high voltage like this. Probably some colorful
glass on the openwire phone lines too. Why is America so bent on destroying
places like this today ? 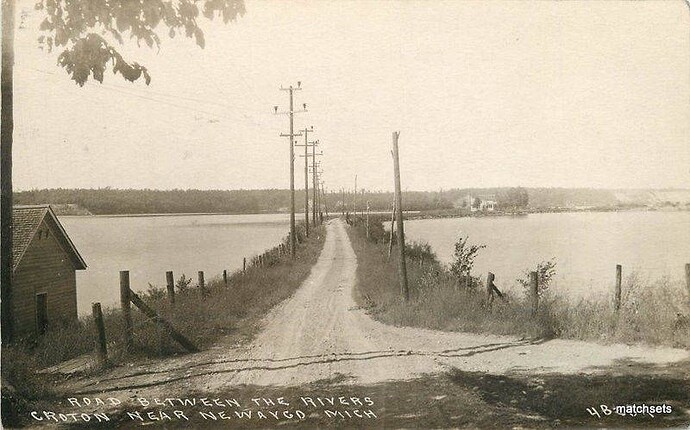 This one is special to me, as Arlington, Oregon was a stopping place for my father
and his friends when duck hunting in the area when I was just a kid. But this photo
is of the OLD Arlington, the one now under the waters of the John Day Dam. In the
early 60’s the dam was built and the Corp of Engineers built a new town up the gulch
from where it was in this photo, when it was down along the Columbia River. US 30
was the first major auto road east from Portland, and Arlington had a ferry to jump
across the river to Roosevelt, Washington and points north. We would go into Arlington
and get a pizza and I would listen to the men joke around before going to a motel.
On the side of the pizza joint was a neon sign advertising “COLD DRINKS TO GO”. 40
years later, I bought that sign from the owner and it now hangs in my shop. 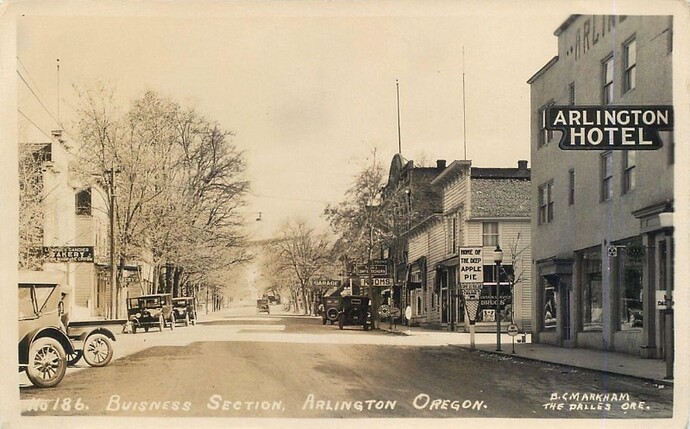 This shot captures some great Model T era history, as we see a very early example of
paving a “highway”. The “Better Roads” movement was a big deal as automobiles began
to reach numbers that began to tip the scales away from horse-drawn vehicles. Location
is unknown, but the photo is dated “1920”. What a quaint scene, with the City Ice Co. wagon
making its rounds, general store, tree-lined highway, and two arms of openwire telephone
lines. 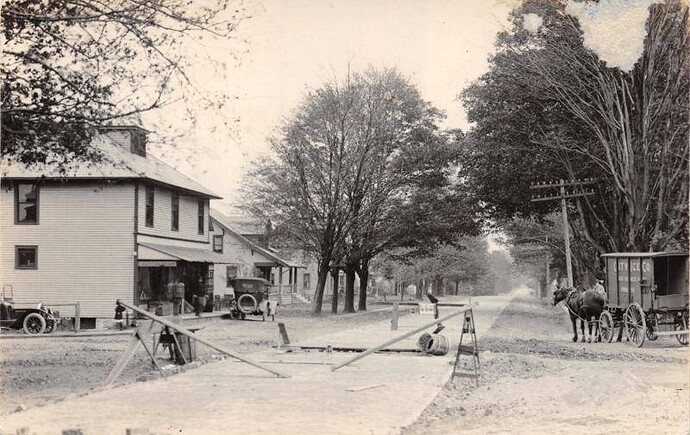 Photo information says “Monroe, Maine. 1915”. Much has changed in Monroe
since this photo was taken. The mill pond seen here is drained and now a
wild, flowing body called Marsh Stream. When the mill went away, so did
the town, and little remains. But in 1915 this looks like a little heaven-on
-earth kind of place to be. 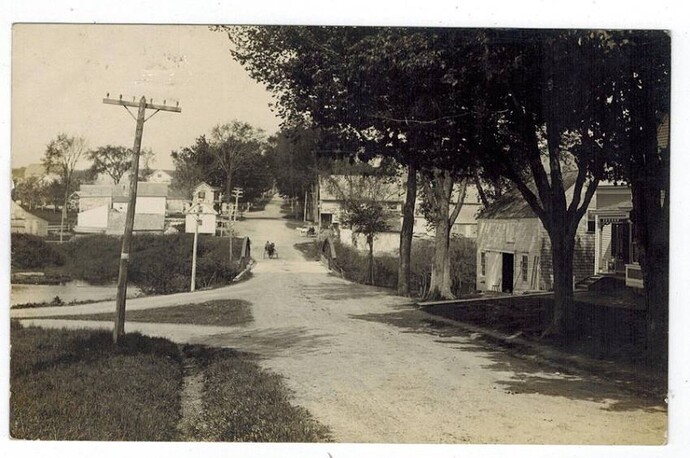 I see no automobiles and a lot of horse-drawn vehicles, but the drink menu includes Soda,
Mineral Water, Root Beer, and Auto Gasoline !

Interesting to see how auto fuel was marketed (not on every other street corner at brightly
lit stations) in the early days of motoring. 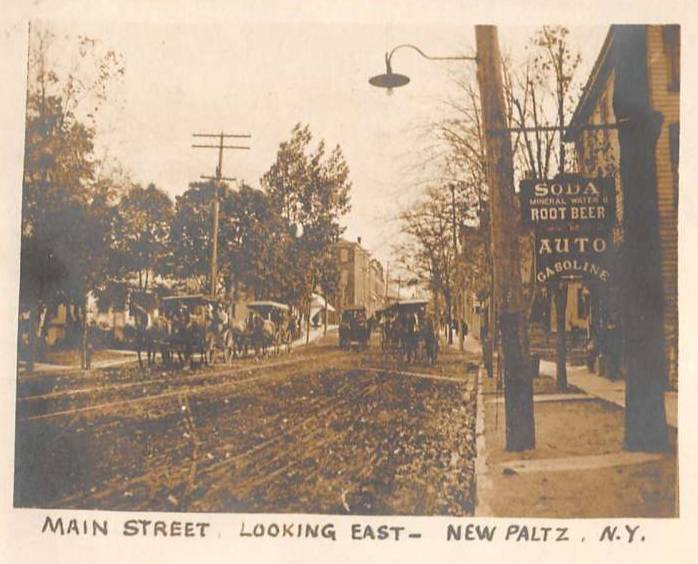