Oscar Boeckley opened his Rexall Pharmacy in these rented facilities sometime in 1917 at the five way intersection in Latonia, KY known locally as Ritte’s Corner. In the mid-30’s he had erected a new three story buff brick combination pharmacy and apartment building on the corner to the left of his store in the photo. Interestingly it has an elevator. That building stands today in perfect shape, but the pharmacy is no longer there. At last look there was a florist shop in business there.

About 7 utility poles beyond the store and to the right was the entrance to the Latonia Race Track which in the day was at least the equal of Churchill Downs, forever the site of the Kentucky Derby. The local Latonia interests lost out to Churchill Downs in a political power play and closed about the time Oscar opened his new facilities. The large building was part of the grandstand.

I knew Mr. Boeckley (I dared not call him Oscar, I doubt that anyone but family did.) because as a lad I worked in another pharmacy in Latonia, located in a building he owned. The two pharmacies worked together in friendly competition so I would see Mr. Boeckley frequently. His was an intimidating presence. He was an imperiously large man, with wild snow white hair and rimless glasses. He didn’t suffer young people gladly.

As a side note, Mr. Boeckley eventually sold the business to long time co-pharmacist Harry Nieman. The original rented building was razed in the 60’s and is now a modest Veteran’s Memorial park. Behind and beyond the Memorial Park are several businesses, one of which is a pharmacy operated by a grand daughter of Mr. Nieman. 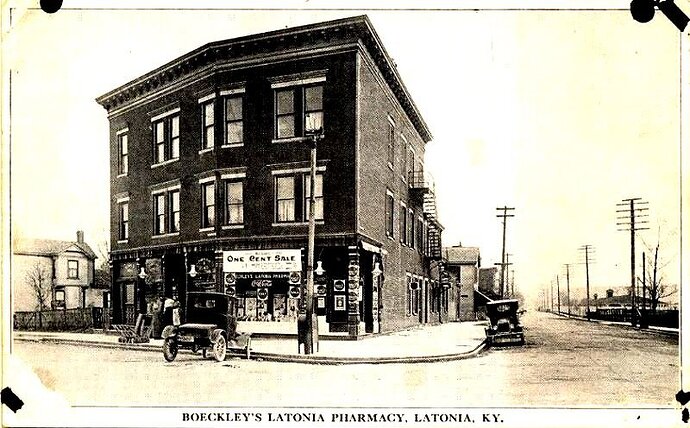 Neat! Thanks for sharing.

Great historical photo and backstory. I just love it when a good history
can be learned and accompany photos like this. Thanks for posting it
here. I’d really like to see Royce’s site bloom with more stuff like this.