My 1911 rear ddifferential leaks pretty bad where the two halves come together. It is not leaking from a rivet. Is there a way to fix the leak? Art

Yes there is, but it involves taking the axle out of the car. I tried to re-seal mine in the car and ended up having to take it out as it would not go back together. The issue turned out to be the thrust bearings had dropped out of place and I needed the pinion hole to work through to get them back in to place. I had only opened it enough as not to upset the axles, but to be able to use a liquid gasket material instead of paper. So, as much as it is work to take it out and re-install it, it would have taken less time if I had not tried to do it in the car.

What year were you working on? I think the early ones like mine had no gaskets. I would think that taking it apart and using a product Ultra Black RTV on the two halves would work. I am hoping not to do all of that. Art

And you can see what I’ve been doing with it here.

Introduction and what I did with my 'T' Discussion Forum

Hello all. I’m a new member to this site and happily found it while internet searching for Model ‘T’ stuff. As this is a spot to tell what you did with your T today, I would like to share what I’ve done. I have recently taken over the responsibility of caring for my Dad’s '26 Tudor that we restored and put back on the road about 12 years ago. It is getting some needed love. This past 2 weeks, rear axle removed, pumkin split and re-sealed,(dripped ever since rebuild 8 yrs ago…grrr) dis-assembled …

From my experience, I don’t recommend trying to do it in the car. For one thing, if you’re going to use a RTV type of sealant, both surfaces are going to have to be dry with no oil residue or there’s a good chance that it may not take. You’ll need to get it far enough apart to be able to make sure its clean and dry. I’m happy to offer advice for future questions, but ultimately the choice is yours as its your car. Good luck with whatever direction you take.
Mark.

I think the early housings had gaskets. Unfortunately no one sells a gasket for them. I bought gasket paper from NAPA. It is 1/64" thick. The only way to make a gasket is to take the housing apart so you can mark around it with a pencil.

I rebuilt the rear axle for our late 1911 (early model year 12) rear axle last fall while I was restoring the car, it did not have a gasket between the two housing halves when I took it apart. I didn’t think to use ultra black RTV when I put it back together, and guess what started leaking shortly after I put oil in it. Trying to seal it while assembled helped only a bit. I bit the bullet and pulled the rear axle, took the housing apart, cleaned it well and used ultra black RTV sealant on the two surfaces before joining the halves together again. Not a drop since.

I guess I will take it apart because it really makes a mess. Any tips on that job? Thanks for the info. Art

Follow the “black bible” and the MTFCA manual for the axle. The closed spool on the driveshaft is a bit of a pain. I had to suspend my rear axle assembly from my engine lift (as shown in the picture below) and use a rubber hammer to get the driveshaft to break free from the previous owner’s sealing.

BE SURE TO USE ULTRA BLACK RTV ON THE JOINT BETWEEN THE CLOSED SPOOL ON EACH SIDE!. If you don’t, then you will have another leak. I pulled, took apart and sealed up my axle twice in a week because I made that mistake! Once to add sealant between the two axle housing halves and the second time to to add sealant to each side of the spool. No leaks after that. 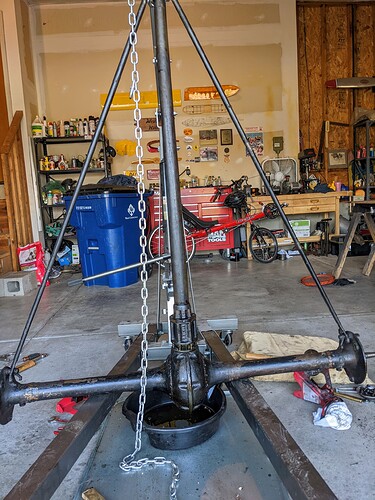 Long shot here, but what lubricant do you have in the differential? The viscosity called for is like molasses in January here in northern Kentucky - 600W. Modern lubricants have a way of finding their way out of Model T as well as Model A joints and seals. The higher viscosity may slow the leak to an acceptable amount rather than a total differential disassembly. Good luck in any event. Tom in Taylor Mill, KY 41015

I have been using the 600W sold by the vendors. Art